At the airport outside Lusaka I had my first experience of Africa. The bus that was to transport us on our road journeys throughout our time in Zambia had just enough room for the 24 people on the trip (15 students, 9 teachers), but where was our luggage to go…? Eventually after a prolonged wait in the airport car park a decision was made to pile our bags onto the back seats of the bus and a car was needed to transport the four seat-less passengers. As we drove out of the city and into the countryside the scenery changed immediately. All of the houses were shacks. Each village had stalls running along the road. Watermelons were everywhere to be seen, stacked up into pyramid shapes and there were a lot of barber shops. 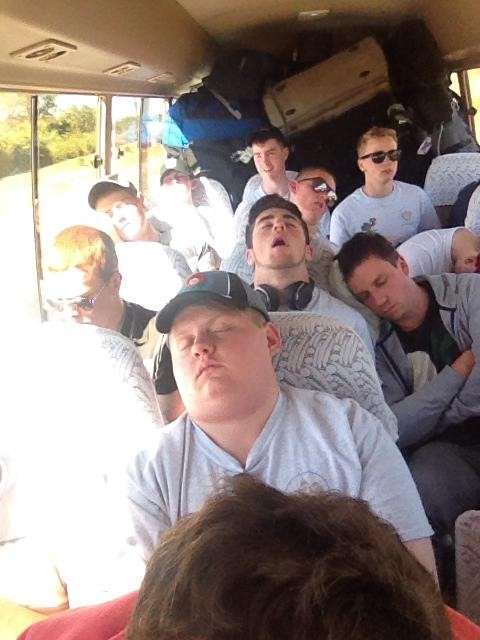 We arrived in Kabwe (3 hours outside Lusaka) nearly 24 hours after I had left my house in Dublin! Our accommodation was basic but better than what I had expected. There was Wi-Fi (for those who wanted it) and we even had a TV! The showers were the only let down as they were literally a drip of either scalding or freezing water. Mosquitoes were hardly seen throughout the trip but I wasn’t taking any risks and slept with the net over me every night.

Breakfast took a little getting used to as it was stale cornflakes and warm milk, but not the warm milk as we know it. It was strange tasting to say the least. Lunch consisted of bread, peanut butter, cheese, bananas, apples and oranges. Dinner was cooked by a group of us every night so it was the same stuff as in Ireland. Down in Livingstone I had crocodile bites which were very nice! They tasted a bit like chicken.

The reason why we went to Zambia was to start the construction of a new school. There is a school up and running in Kabwe called Sables and it is supported by an Irish charity, Zamda. Zamda was set up and is run by St. Joseph’s CBS, Dublin, Ireland. Sables is on rented land and the land owners are selling off the land so basically Sables have been told to move. Sables is a school for 100 of the worst off children from the nearby slums of Makalulu and Katondo. 19 of the boys are orphans and live in the school where a full time carer/teacher stays with them. 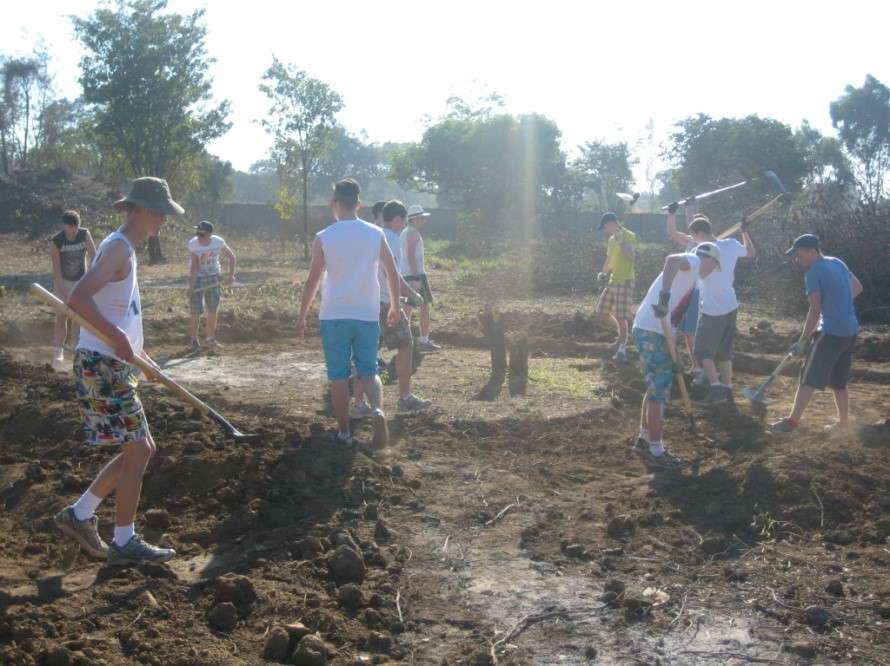 One of the days I visited four homes of students in Makalulu slum. This was an extremely humbling experience. I still cannot come to terms with how people can live in such appalling conditions. There were 6 people sleeping on the bare floor in a room smaller than most bathrooms! The majority of houses in the slum will flood during the rainy season as the roofs have holes in the thatching or the metal. Sanitation is extremely poor all over Zambia.

Our mornings were spent working at the site of the new school in Don Bosco run by the Salesians and only a 5 minute walk from Sables. We began by clearing the land of trees and branches which left many with battle scars, most notably one of teachers with a cut running nearly the length of his forearm! The branches were sharp! We then measured out the area for two classrooms and began digging the foundations. The ground was very hard and it took some time but after the fourth day we had the foundations dug. Cement was mixed and laid and operations began to run smoothly due to the late arrival of a builder from Dublin. We then, with help from a few of the locals, began digging the foundations of a third classroom and some banana trees. These were both work in progress when we left. Since then the new school has been developed and is fully functioning.

Our afternoons were spent in the school with the children. They had a song ready for us welcoming us to Sables and a number of the children did traditional Zambian singing and dancing which is very strange to the Irish eye. The children were delighted to see us, a group of ‘mzungus’ (local word meaning white people) that they could play with (and get off class!). It was amazing to see the smiles on their faces but it was hard to believe that they have such different lives to us. We didn’t do any teaching but rather just spent time with them playing, dancing and singing.

They all had a keen interest in sunglasses, hats and cameras. There would always be a crowd around us as we stepped out of the bus into the school looking to take our SHCs. I got a pleasant surprise at how honest the Zambian people are. At the end of school every day the children would return the SHCs to us intact and would even clean our sunglasses! Another example of the lovely Zambian honesty was when we were walking through Kabwe markets and a young lad around my age came up to one of the lads in the group with a 10 Kwacha ($2) note that he had dropped 30 metres back. Obviously he got to keep the note due to his honesty! The Zambian people are extremely friendly and at no stage did it feel like we weren’t wanted anywhere. I picked up a few words of the local language, Bemba, which impressed everyone and I got some great reactions in the markets when I addressed the locals in their native tongue! 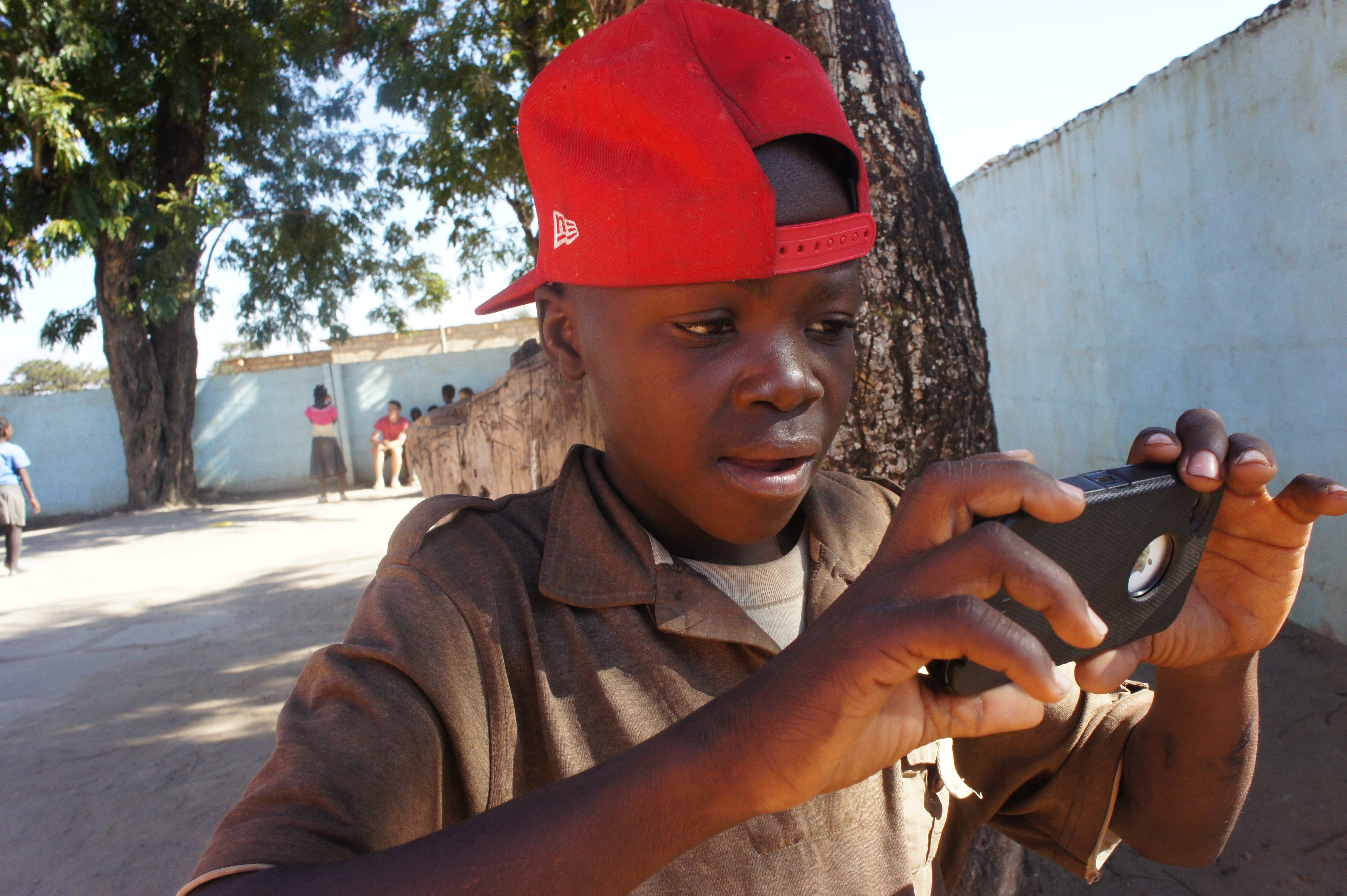 The Zambian national football team played two matches while we were over there so on match day we went to the market, bought fake Zambian jerseys and wore them through the city. Everywhere we went people would cheer with us shouting ‘CHIPOLOPOLO’, the Zambian team’s nickname. The atmosphere was ecstatic even though we were hundreds of miles from the match.

We visited a rural community in Kangombe an hour from Kabwe where life is very basic. St. Joseph’s CBS had funded a project to build a school there a number of years back. There are now 70 pupils attending the school with 3 voluntary teachers as the only members of staff.

We also visited, Shitima, a local primary and secondary school of which Sables is a feeder school to. This is run by a British charity, Zamcog, and has a much better set up than Sables. This school also caters for the neediest children in the area and this is why they work closely with Sables.

We played football matches everyday against the children in Sables and the teachers and mixed the teams. Some of us (me) learned a few traditional songs and attempted to do some of the dances which the children found hilarious!  We could see how much they enjoyed spending time with us. A few of them had learned how to pronounce my name better than most foreigners do! They even added my name into one of their songs! 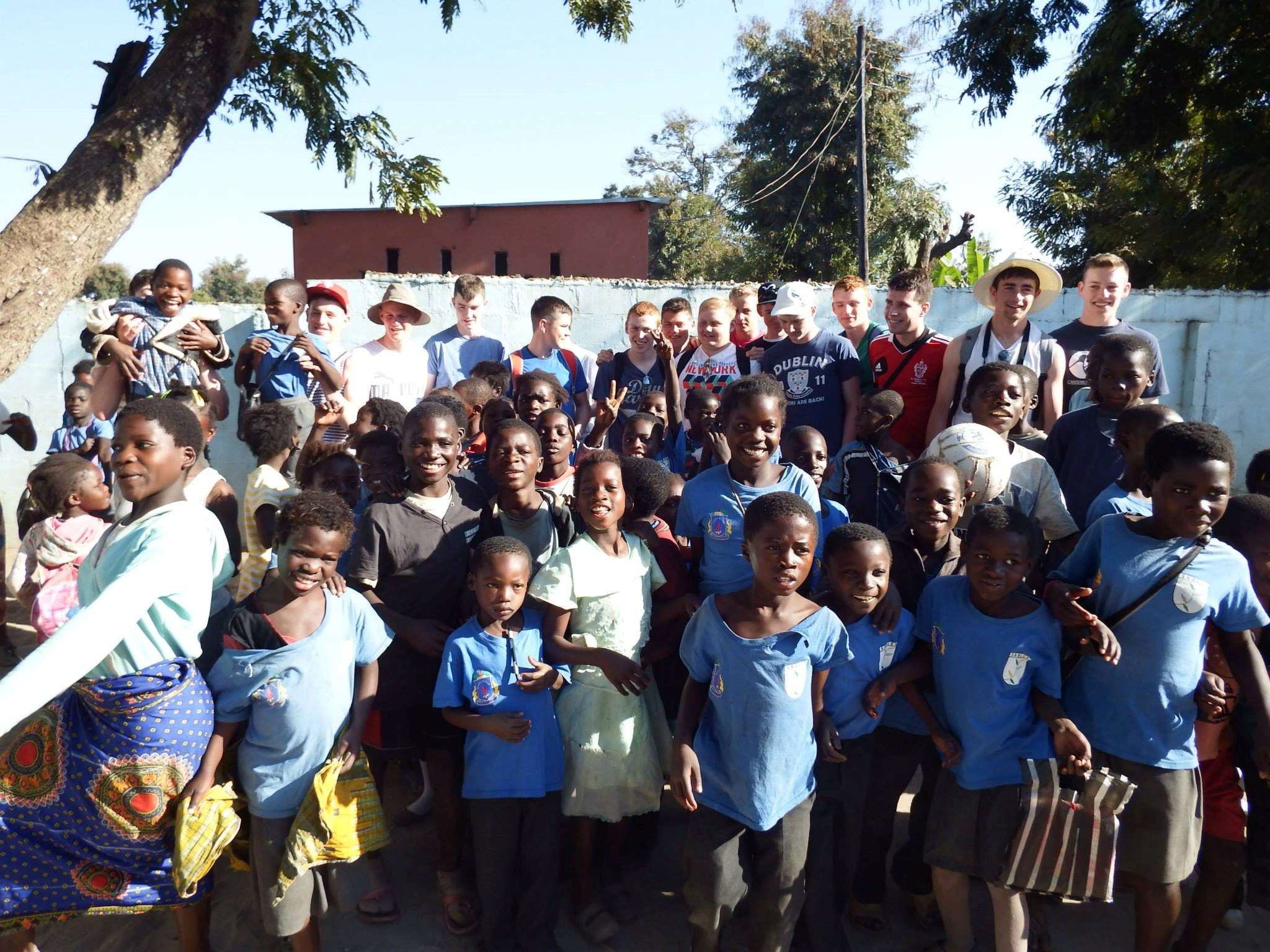 Our last day with the children was emotional all round. We sang a song for the children thanking them for ‘making our trip so special’. Each child received a package full of donated clothes and toys which they were all extremely grateful for. We were all very moved by this. It was a very sad but happy day and a number of the children were shedding a few tears as the care worker told them that it was our last day. One of the orphans gave us a letter thanking us for being his parents and supporting him and not to not forget about them. I was very moved by this and was fighting back the tears.

We went south to Livingstone (10 hours in a bus) and went on an over-night safari in Chobe National Park, Botswana. It was a great experience too. We went on a river wildlife cruise and also a land safari. We saw elephants, giraffes, warthogs, buffalo, crocodiles, zebras, many birds, lots of antelopes, hippos and we got up close and personal with a leopard! We camped out in tents under the stars. It was the first time in my memory that I have seen the Milky Way. It was a great end to the trip.

The trip was a fantastic experience and I would definitely recommend it to anyone.

NextHow to get 12 flights for under €250Next